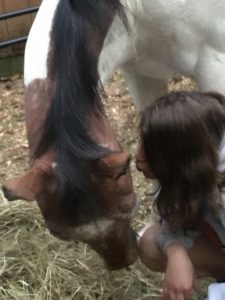 Hazel and I met on my first trip to Horseworks Wyoming in March 2016. She wasn’t ‘first string’ at Horseworks so I only learned her name after a few days, but she kept catching my attention with her soft eyes and nice coloring. Our wrangler for that trip, a really great horsewoman, hadn’t ridden Hazel and wasn’t sure of the last time someone had.

The wrangler seemed to realize I wasn’t going to stop asking about her, so she agreed to help me do some groundwork with her. I remember approaching Hazel with a halter the first time, half expecting her to walk away, but she stood there calmly and seemed to say “I picked you, human. Not the other way around.”

We did a join up and continued working together slowly, since the wrangler wasn’t too sure how she’d react having not been ridden for a few years. Hazel is well-trained (having been trained by the great Nate Brown) but she is sensitive. She will only respond if you ask ‘just right’. She’s a great teacher. 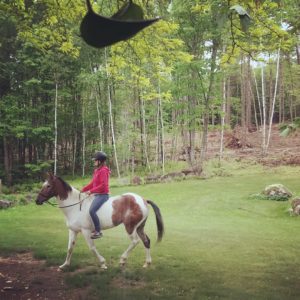 When I came home from the trip, I told my now-fiance Kevin about Hazel and the bond I had formed with her. I remember him saying, “Wow, your face really lights up when you talk about that horse.”

A few months later, Kevin and I moved to Brooklyn, New York to start our fancy jobs in finance. I often found myself thinking about Hazel as I sat and ate dinner at my desk, plugging away at spreadsheets. Hazel helped me find an honesty in myself. So, two years later, Kevin and I uprooted again, this time headed for New Hampshire to start a small horse farm. We took a short weekend trip back to Horseworks. I wasn’t sure yet if I was going to ask Hazel to come back with me to the East coast, but when we worked together again, it just felt so right. We got her on a trailer headed East and a few weeks later Kevin and I met her in New York and brought her home. 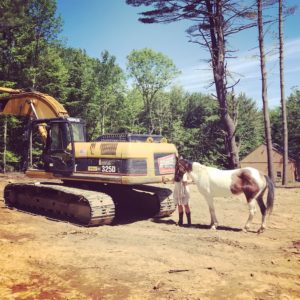 Hazel was tentative about the new sights and sounds. She wasn’t sure what to make of a horse barn, having been a proper cowgirl horse. The first time it really rained, she didn’t go under cover and chose to stand in the cold. I finally coaxed her under the shelter and now she chooses her walk-in stall if it’s even drizzling, just like a properly spoiled sport horse 🙂

In the past few weeks, Hazel’s really started to open up and show her personality. She loves going on walks by hand up the road to flirt with the neighbor’s horses and she is quite curious about all the new things to taste in an East coast forest. Kevin is a horseman-in-training and Hazel takes every opportunity to remind him of that fact. She has beco 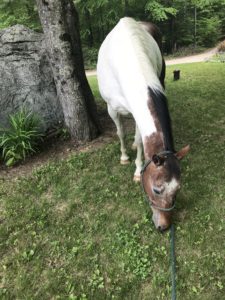 me fast friends with our logger’s black lab, Daisy. Our logger also has a big yellow excavator. I worked from home the first day he brought it out because I was worried it would spook her; but after some initial excitement, she was as cool as a cucumber.

For now, Hazel and I are focused on growing our relationship and trust. We are still working on getting used to an English-style saddle. Eventually, I’d like to see what we can do together at liberty. Hazel has more “go” than “woah” so we are working on transitions down with seat and leg instead of reins. I’m also hoping to teach her to lay down.

Hazel doesn’t know it yet, but she is getting a new friend in July. We’ve adopted a BLM mustang gelding. She’s not an overly social horse, but it will be wonderful for her to have a friend.

I’m grateful to Horseworks for introducing me to my four-legged soulmate. Hazel and Horseworks gave me the inspiration to live my best and truest self, and that is greater than any souvenir I could have ever asked for.