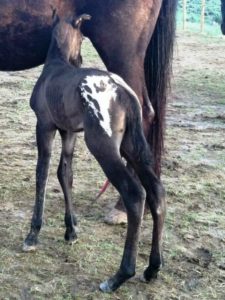 So this is the first picture MaeCile ever sent me of Wings, I think it is the day or day after he was born, telling me Pasha has a new half-brother who looks a lot like Quinn. Two weeks later I flew over to Wyoming from Scotland to meet him. He was pretty reluctant to let me near him initially, but he had a super Mum who was quite happy to show him that attention wasn’t such a bad thing. By the end of 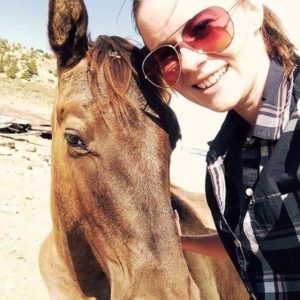 two weeks he came round to my affections!

The next summer as soon as I arrive I was asking MaeCile where the babies were and made a trip out to see them whenever possible. They came back to the ranch from winter pastures while I was there and I loved spending time with them. Wings likes to sleep a lot and he could usually be found napping in the corals, but we managed to take all the babies out on a trail ride one day. While the others were running about having a great play, Wings just followed on behind my horse quite happy to take life easy.

In January 2017 I was lucky enough to call Wings mine and he arrived in Scotland after a long journey over the pond!  He and MaeCile met the hauler in Thermopolis to head to Texas where he spent 6 weeks in quarantine. He flew to Amsterdam and spent the night in a h

orsey hotel before he was brought over on the ferry and dropped off on our doorstep! He came off the trailer without a second thought and soon settled straight in. He must have been adjusting to the time difference as he could often be found sleeping in his stable in the middle of the day!

Not much as changed since then, he still loves to nap and will quite happily let you snuggle in with him. 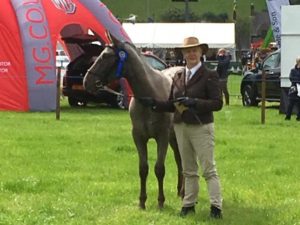 Last summer he went out showing in-hand and was a pro! This is him at the local agricultural show picking up second in the youngstock class.  Aunty Val worked on a pony stud so was quite happy to show him the ropes! 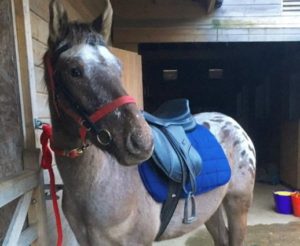 Early this year we started backing Wings and he hasn’t batted an eye. Every new task you present him with he takes in his stride and comes running to meet you every day at the gate!

In the last week Wing has started to be ridden under saddle.  We’re working on steering but we’ve mastered stop and go! He’s quite happy to let you jump on from the ground and loves to stop to talk to dog walkers.