My gap year cowgirl adventure gave me a glimpse into Native American history!  One time I accidentally went rock climbing in the Appalachians. Today, I took it a step further and went rock climbing on horseback. After moving the neighbours cows, one of the cowboys took a couple of us on a ride up the mountain to see the petroglyphs. The Native Americans had left drawings on the 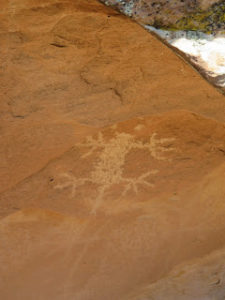 rocks up there so we went up the steepest slopes I’ve ever seen, it was almost vertical and there were loads of rocks. I am really proud of myself I did that, even though I am afraid of heights, and it was really beautiful! Every hill we’ll be riding after this will be a piece of cake. I imagine this is what archaeology was like before they had cars and stuff: exploring ancient sites on horseback. Moving the cows was really cool as well, we had quite a big herd and I had to bring back stray cows a couple of times. I felt like a proper cowboy! It was fun to actually have a purpose on a ride. 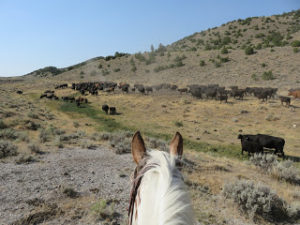 Yesterday my gap year cowgirl adventure included our first training session with Speck, he hasn’t really been ridden in years so we basically started from scratch. MaeCile showed us her training methods, she did join-up, lunging and a lot of desensitizing with different objects. It was really cool to see her working with a horse and to see how much the horse improved over such a short period of time. The principles she uses are really similar to what we do back home but I also learned some cool new stuff. She worked with him again this morning (I was up at 5.30 during my vacation…) trying to get him used to throwing the reins over his head. At first he was really spooked by it, but after working with him for an hour he did great. It is so cool to see how much a horse can learn without forcing it into anything. At one point during the session, she wanted Speck to get used to different movements so Ava, Rosie and I did jumping jacks in the round-pen, funniest workout ever!

I know I say it every day but today might have been the best day of my gap year adventure so far. We wrangled nine horses from a pasture into an enclosure, and when I say pasture I don’t mean the kind of field we have back home. This field had a creek, hills and was covered in sage bushes. We had a plan to get the horses in but of course the plan 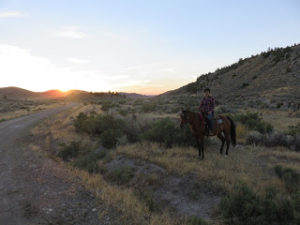 went out the window as soon as we started. The loose horses bolted so Ava, Rosie, Lucy and I followed them and somehow managed to get them into the enclosure within five minutes. I don’t even know what happened, it all went so fast. We were galloping through the field, dodging bushes and rabbit holes while trying to keep an eye on the horses. It was the best ride ever, I was smiling and laughing so much it almost hurt, I must have looked like a crazy person. When we rode back to the Lodge, one of the girls didn’t want to ride so she took the car and I trailed her horse back on a lead rope, I even loped while leading that horse.  It was a perfect day as a cowgirl 🙂

* This is a reposted blog that I wrote in August 2016, during my first time at Horseworks Wyoming. If you want to read more of my gap year cowgirl adventures, check out my travelblog here.

1 thought on “The life of a HorseWorks Cowgirl”